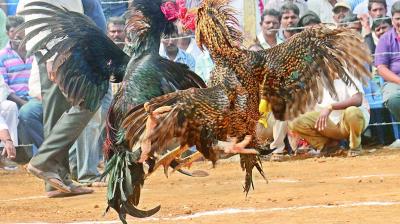 Visakhapatnam: There are many breeds of fighting roosters using for the Sankranti cockfights, but the highest demand is for Kaaki Dega, Dega, Kaaki Nemali breeds. The names indicate their fighting skills.

These breeds jump well and attack their opponents strategically and never back off, said Mr G. Ganesh Kumar, who sells fighter roosters in North Andhra.

It is believed that Kaaki Dega and Dega roosters are more ferocious during the morning while others would fight better in the evenings. Cocks are named according to the colours of their feathers.

It is believed that planetary influences work on the fighter roosters as well, apart from humans. These are said to impact the blood circulation in roosters, and determine when they fight best.

The birds are also trained daily to jump and swim to make them stronger. “Though I have several breeds in my farm, I get better profit selling Kaaki Dega, Dega, Kaaki Nemali breeds as the demand for them is very high,” Mr Sateesh said.

Cockfighting is prohibited under the Prevention of Cruelty to Animals Act, 1960, and the AP Gaming Act, 1974. Bird lovers oppose cockfight events as thousands of roosters die in the bloody sport.

There are several doubts over whether cockfights come under the Cruelty to Animals Act, 1960 or nor, as the police has been registering cases against organisers and punters under the AP Gaming Act.

The Hyderabad High Court admitted yet another petition alleging that gambling on cockfights was going on on a large scale. The court has sought a report from the district administrations and the police.

Fighter roosters are not an endangered species and they are supposed to be killed for meat. When two roosters come face to face, they fight with each other, an organiser said.