Gamecocks are from centuries of scientific breeding just like horses for racing sports and for military and other purposes.

Year 2011 news articles below from TMZ, HuffPost, TheWrap, and Daily Mail mentioned “chicken massacre-ing” and “115 birds were euthanized on the spot“.

Massacre of gamecocks and massacre of humans are crimes against cockfighters and freemen.

TMZ has obtained photos of the devastation allegedly caused when Steven Seagal participated in a TANK-smashing, chicken massacre-ing, police raid on a house in Arizona back in March. 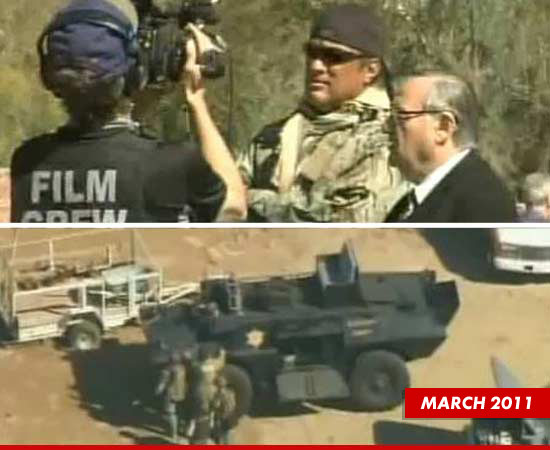 As we first reported, the owner of the home has taken legal action against Seagal and the Maricopa County Sheriff’s Dept — claiming cops had no right to smash their way into his house because he was NOT hiding a cockfighting farm.

In his legal letter to Seagal and the sheriff, Jesus Sanchez Llovera claims his 11-month old puppy was shot and killed in the raid … which was reportedly captured on tape for Seagal’s reality show.

But a member of the Maricopa County Sheriff’s Dept. is adamant — NO ONE ever shot a puppy. 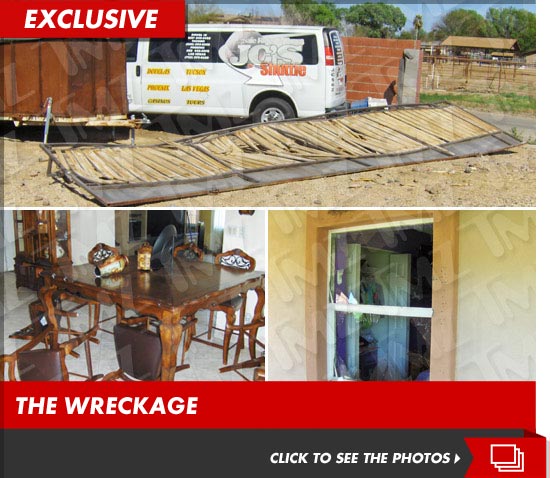 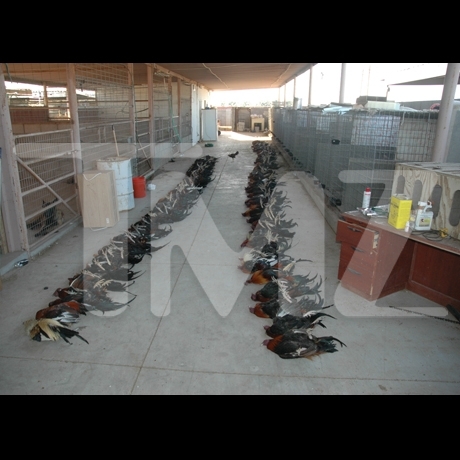 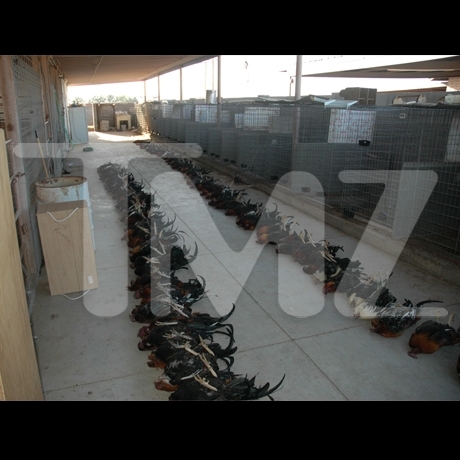 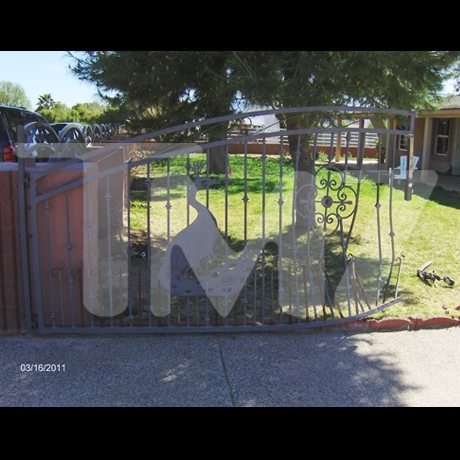 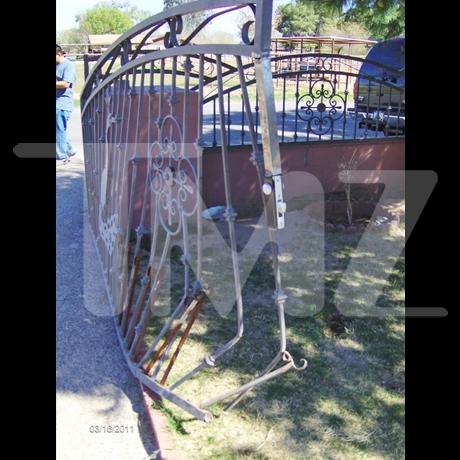 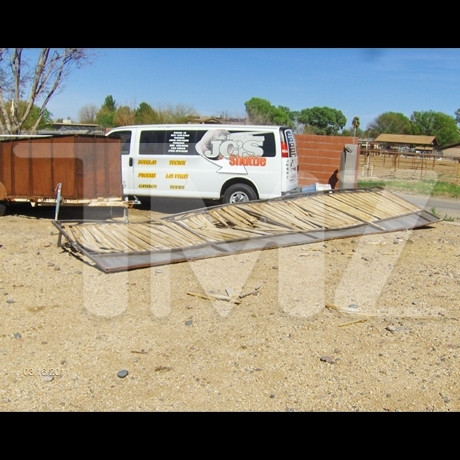 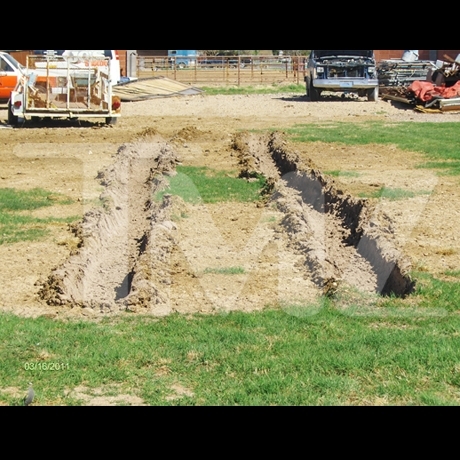 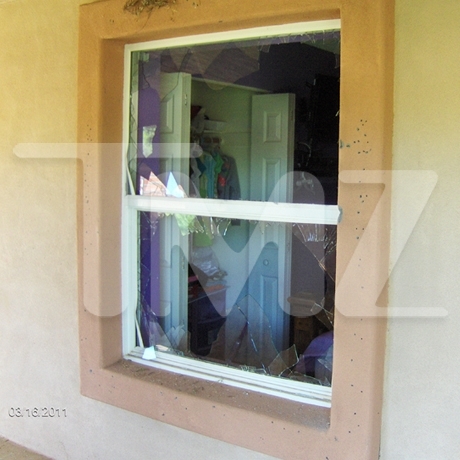 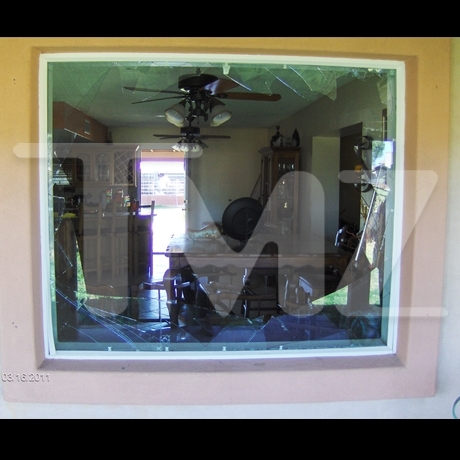 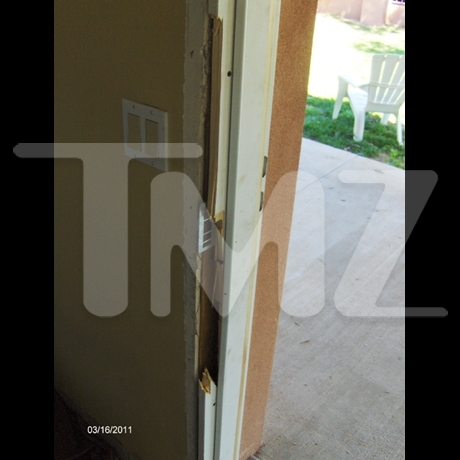 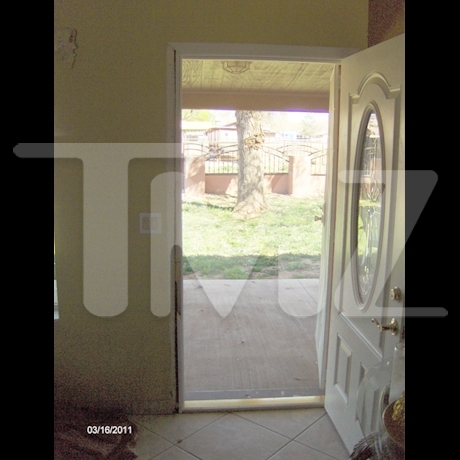 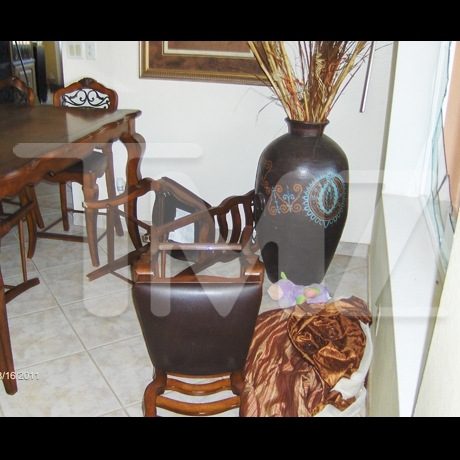 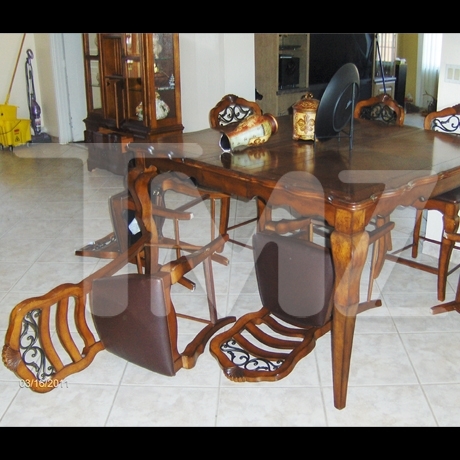 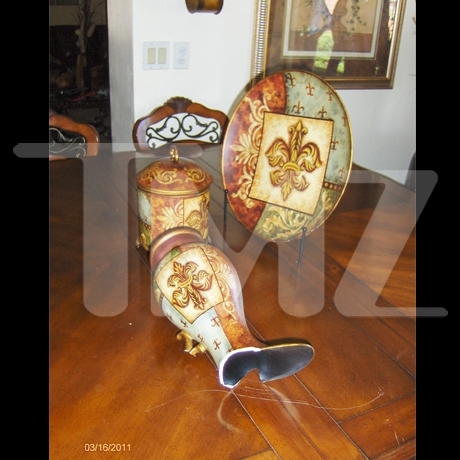 The blood of a dead puppy is on Steven Seagal’s hands … this according to an Arizona man who claims the actor participated in a deadly police raid on his home back in March that was taped for a reality show.

Seagal, along with Maricopa County Sheriff Joe Arpaio, has been served with an official notice of claim from Jesus Sanchez Llovera — who contends Seagal and the Maricopa County Sheriff’s Department performed an “unfounded” raid on his home because they believed Jesus was operating an illegal cockfighting farm. Jesus denies the allegation — insisting he only raises the roosters “for show.”

Jesus claims Seagal arrived to his home on March 9 with a TANK — and rammed into a gate on his property. Seagal was backed up by an MCSO Tactical Operations Unit — armed in full riot gear — which stormed the house. The entire incident was captured by a camera crew taping for Seagal’s reality show, “Steven Seagal Lawman.”

Jesus claims his 11-month old puppy was shot and killed during the raid — and his home sustained “substantial damage.” He also claims the cops killed more than 100 roosters that belonged to him.

The notice of claim is the first step towards a lawsuit — and Jesus’ lawyer tells us his client is demanding $100,000 for the damage and he wants Seagal to issue a “formal written apology” to his children “for the death of their 11-month old puppy, a beloved family pet.”

We called both Seagal and the Maricopa County Sheriff’s Department for comment — so far, no response.

What is America to do about the epidemic of cockfighting that might be undermining our liberties at home, maybe?

Well, if you’re wondering, Arizona’s Joe Arpaio, Sheriff of Maricopa County, has set the standard of cockfight confrontation. And it basically involves being utterly hysterical and deploying as much manpower and armaments as can be mustered against an unarmed dude with a bunch of chickens.

It all went down in Phoenix, three days ago, where in “a massive show of force…the Maricopa County Sheriff’s Office executed a search warrant and arrested the homeowner, Jesus Llovera, on charges of suspected cockfighting.”

How massive? Exactly this massive!

West Valley residents in the neighborhood are crying foul after armored vehicles, including a tank, rolled into their neighborhood to make the bust.

Neighbor Debra Ross was so worried she called 911 and went outside where a nearby home had its windows blown out, was crawling with dozens of SWAT members in full gear, armored vehicles and a bomb robot.

“When the tank came in and pushed the wall over and you see what’s in there, and all it is, is a bunch of chickens,” Ross said.

But how many of those chickens were actually bombs that needed to be fought to the death by Joe Arpaio’s battlebots? We may never know.

Or at least, we won’t know until these events are depicted on a forthcoming episode of A&E’s Steven Seagal: Lawman:

Seagal was riding in the tank.

The Sheriff’s Department has entered into a contract with Seagal and part of that contract gives Seagal carte blanche to go along with the sheriff as he arrests people.

All of this comes courtesy of Radley Balko, who will soon be bringing his game to these pages. As highlighted in his post, Balko has done some great writing exploring the nexus of police work and reality television, so click over to get a preview of coming attractions.

According to the report, “Thousands of dollars in damages were made to the property and 115 birds were euthanized on the spot,” so, hooray! Joe Arpaio is the undisputed king of cockfighting!

Steven Seagal Lawsuit: Don’t Bring a Tank to a Cockfight

Steven Seagal is being sued by an Arizona man over a raid in which Seagal and sheriff’s deputies used a SWAT tank and other armored vehicles to bust up an alleged cockfighting ring at his home for the A&E show “Steven Seagal: Lawman.” In the civil suit filed Tuesday — which also names the Maricopa County Sheriff’s Department — Jesus Llovera claims that the March 10, 2011 raid on his Laveen, Ariz., residence was excessive, and played up for the sake of the show, AZ Central reports.

Deputies from the Maricopa County Sheriff’s Department said they believed that Llovera, who had earlier pleaded guilty to attending a May 2010 cockfight, had roosters and chickens on his property in violation of his probation, and that he was raising birds to fight, a felony.

Law enforcement discovered more than 100 roosters on the property, some bearing alterations suggesting that they had been bred for cockfighting, authorities said. The birds were subsequently euthanized.

Llovera was charged with raising animals for cockfighting and possession of dangerous drugs, which he allegedly used on the animals. His attorney has requested that evidence in the case be tossed, saying that the warrant was not properly served.

Regardless of whether one believes Llovera was involved in cockfighting, Campos added, “there was no justification for the sheriff’s office to destroy my client’s home, to demolish his fence, to destroy his daughter’s bedroom, to bring 30 to 40 fully armed SWAT officers, to bring a tank, the entire bomb unit, a bomb robot, canine units, to set off explosive devices for confusing my client and to have Steven Seagal’s production company filming to make an exciting reality show at the expense of my client’s constitutional rights.

“All the sheriff’s office had to do was to call my client and ask him to meet with them,” Campos said. “But this common sense does not make for good reality television.”

Sheriff’s deputy chief Dave Trombi told AZ Central that the raid was standard operating procedure, and was not beefed up for television.

Llovera’s lawsuit claims that the raid fits a pattern of Arpaio “arresting and prosecuting individuals without probable cause solely for the selfish and improper purposes of achieving personal and political gain through publicity.”

Arpaio previously participated in a reality series, “Smile … You’re Under Arrest!” on the Fox Reality Channel.

“Steven Seagal: Lawman” follows former action star Seagal as he performs duties as a deputized officer. The episode featuring the raid on Llovera’s home was scheduled to air on Jan. 4, but the A&E Network, which airs the series, has pulled the current season from its schedule.

A&E has not yet responded to TheWrap’s request for comment, nor has a spokesman for Seagal.

Llovera is seeking unspecified damages, to be determined by a jury.

This Arizona sheriff was only investigating a cockfighting ring on a small farm.

But Maricopa County Sheriff Joe Arpaio was joined on a search warrant by a SWAT team, a bomb robot, two armoured vehicles, an action movie star and a film crew.

Jesus Llovera, 42, was arrested for cockfighting after the operation involving Steven Seagal, 58, who drove a tank onto the property as he shot a reality television show.

Big job: One of the armoured vehicles used in the Arizona cockfighting raid that also involved a SWAT team, bomb robots, actor Steven Seagal and a film crew

Mr Arpaio, well known for his tough stance on immigration, served the search warrant with his team on Llovera’s home in Laveen.

Llovera was on probation after being arrested at a cockfight last year, but he was unarmed and has no police record of owning any weapons, reported The Guardian.

His windows were broken and his front gate was bashed in after the raid. Neighbour Debra Ross saw what happened and was so shocked that she called 911.

‘When the tank came in and pushed the wall over and you see what’s in there – all it is, is a bunch of chickens,’ she told KPHO.

‘With all the things going on, the Sheriff is using all those resources to deal with some chickens,’ neighbour Howard Marshall told 3TV.

‘Here he (Llovera) is,’ Mr Arpaio told ABC 15. ‘Still in action. We have over 100 roosters and we have paraphernalia that’s related to cockfighting.

‘(Mr Seagal) is working with us just like other posse people,’ he added, explaining that he would bring out similar gear for ‘any situation that calls for it’.

Mr Arpaio’s department is working with 6ft 4in Mr Seagal as he shoots a reality show called Lawman – but lawyers estimate the raid cost thousands of dollars.

‘Animal cruelty’s one of my pet peeves,’ said Mr Seagal, who is also a police volunteer.

Working together: Mr Arpaio’s department has joined with 6ft 4in Mr Seagal, pictured, as he shoots a reality television show called Lawman

Mr Seagal is known for his leading roles in action films Under Siege, Fire Down Below and Above the Law – and he has taught martial arts to actors including Sean Connery.

Llovera has been charged with 115 felony counts of owning, possessing, keeping or training roosters with the intent to fight.

More than 100 birds were euthanized at the scene and the remaining birds will be turned over to a third party, investigators said.

Accused: Jesus Llovera, 42, has been charged with owning, possessing, keeping or training roosters with the intent to fight, after the raid on his home in Laveen

Llovera’s attorney, Robert Campus, said the whole thing was a ‘stage’ to help Mr Seagal’s television show and that ‘taxpayers should be shocked’.

But the sheriff’s department denied this and said the use of force was appropriate as they believed he could have been armed.

‘We’re going to err on the side of caution,’ Sergeant Jesse Spurgin told KPHO.

‘We’re going to make sure that we have the appropriate amount of force in case we do run into anything like that.’