SIVASAGAR, Jan 3 – One of the most important antique structures in the State, the Rangghar, is all set to get a major facelift in the coming months as it has been included in the list of 27 model architectural monuments of the country to attract global tourists. The Archaeological Survey of India (ASI) is planning to spend nearly Rs one crore in upgrading the tourists amenities and other infrastructures like parking area development, modern toilet block, cafeteria, illumination, gates, tourists information booth, boundary wall etc., to international standard and as par designs approved by the National Monumental Authority, India. BC Das, Assistant Superintending Archaeologist, ASI, Sivasagar informs that the ASI has already sanctioned an amount of Rs 40 lakh for development of the parking area while around Rs 17 lakh for comprehensive conservation and development works. E-tendring for these works are in the process, he said. Das added that the repairing works like sealing the minor cracks and crevices on the walls of the monument is temporarily suspended till further grants from the National Cultural Fund. The plan to upgrade the monument will boost tourism potential of the district and attract more and more tourists from outside the State besides opening prospects of economic benefit to the local people as well.

The Rangghar, the symbol of Assamese pride and rich heritage, was first built by Swargadeo Rudra Singha (1694-1714) in Rupohi pathar as part of his grand design in building the Ahom capital city in 1699. Then built with wood and bamboo, the Royal family used this as a sports pavilion to watch the traditional sports events like buffalo fight, elephant fight, wrestling, kite fighting, cock fight and many other events. Later, it was rebuilt by Shiva Singha, his successor. But finally Swargadeo Pramatta Singha (1744-1751) had the present double storey 6.6 metre tall Rangghar (22 ft x 11 ft) built with brick slabs with a special kind of rice (bora), eggs and other indigenous materials as mortar. There are pictures of flowers, wild animals, dragons, kites and kestrels engraved on the walls. The roof is shaped like an inverted boat and there are arched entrances on all sides on both floors. The flight of steps on the eastern side leads to the upper floor. During sporting season around Magh Bihu, the Rupohi pathar wore a festive look with big assembly of sports persons and others that exhibited their skills before the Royal family and the courtiers.

The Rang Ghar (rong ghor meaning “House of Entertainment”) is a two-storied building which once served as the royal sports-pavilion where Ahom kings and nobles were spectators at games like buffalo fights and other sports at Rupahi Pathar (pathar meaning “field” in Assamese) – particularly during the Rongali Bihu festival in the Ahom capital of Rangpur.

It is 3 km away from the center of the Sivasagar Town. Situated by the side of the Assam Trunk Road, it lies to the northeast of the Rangpur Palace, a seven-storied royal complex comprising the Talatal Ghar and the Kareng Ghar. 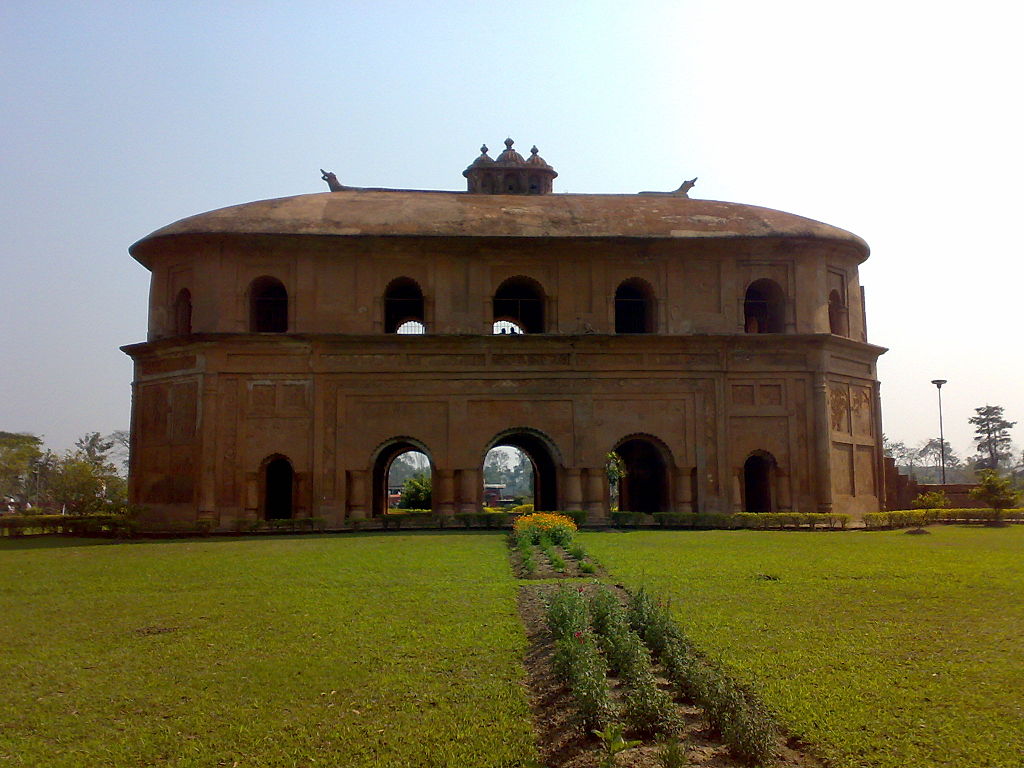 View of the Rang Ghar from the gardens

Assam is a state in Northeast India, situated south of the eastern Himalayas along the Brahmaputra and Barak River valleys. Assam covers an area of 78,438 km2 (30,285 sq mi). The state is bordered by Bhutan and the state of Arunachal Pradesh to the north; Nagaland and Manipur to the east; Meghalaya, Tripura, Mizoram and Bangladesh to the south; and West Bengal to the west via the Siliguri Corridor, a 22 kilometres (14 mi) strip of land that connects the state to the rest of India.

Assam is known for Assam tea and Assam silk. The first oil well in Asia was drilled in Assam. The state has conserved the one-horned Indian rhinoceros from near extinction, along with the wild water buffalo, pygmy hog, tiger and various species of Asiatic birds, and provides one of the last wild habitats for the Asian elephant. The Assamese economy is aided by wildlife tourism to Kaziranga National Park and Manas National Park, which are World Heritage Sites. Sal tree forests are found in the state which, as a result of abundant rainfall, look green all year round. Assam receives more rainfall than most parts of India; this rain feeds the Brahmaputra River, whose tributaries and oxbow lakes provide the region with a hydro-geomorphic environment.

The Ahom dynasty (1228–1826) ruled the Ahom kingdom in present-day Assam for nearly 600 years. The dynasty was established by Sukaphaa, a Shan prince of Mong Mao who came to Assam after crossing the Patkai mountains. The rule of this dynasty ended with the Burmese invasion of Assam and the subsequent annexation by the British East India Company following the Treaty of Yandabo in 1826.

In medieval chronicles, the kings of this dynasty were called Asam Raja, whereas the subjects of the kingdom called them Chaopha (Chao-ruler, Pha-heaven), or as Swargadeo (the equivalent in Assamese) from the 16th century.

Sukhrungphaa (reigned 1696–1714), or Swargadeu Rudra Singha, was a Tungkhungia king of the Ahom kingdom under whom the kingdom reached its zenith of power and glory. Rudra Singha, known as Lai before he became the king, was the son of the previous Ahom king Gadadhar Singha. An illiterate (probably dyslexic), he is best known for building a coalition of rulers in the region and raising a vast composite army against the Mughal Empire. He died on the eve of his march west from Guwahati.

His father had to escape persecution by the previous Ahom king and his mother, Joymoti Konwari, was killed in royal custody. He established his capital at Rangpur.

Sunenphaa (reign 1744–1751), or Pramatta Singha, was the king of Ahom Kingdom from 1744 – 1751 CE. He succeeded his elder brother Swargadeo Siva Singha, as the king of Ahom Kingdom. His reign of seven years was peaceful and prosperous. He constructed numerous buildings and temples. The most famous of his buildings was the Rang Ghar, which is also considered as the oldest amphitheatre in Asia.