VIJAYAWADA: Tension prevailed for a while in Eedupugallu village of Kankipadu mandal on Saturday when Penamaluru MLA Bode Prasad got into a heated argument with the police, who prevented the villagers from holding cockfights under the guise of Sankranti celebrations in a four-acre land.

The arrangements supposedly made for Sankranti celebrations by the village sarpanch and other local TDP leaders led to tension between the police and MLA’s aides when the former reached the spot and tried to evict the people from there. With the situation turning tense, police imposed Section 144 and set up pickets in the village.

Joint police commissioner BV Ramana Kumar, deputy commissioner of police (DCP-I) Gajarao Bhupal and other police officials inspected the places and sealed off the ground sensing that the venue was in fact prepared for holding cockfights.

Upon learning about the police action, MLA Bode Prasad reached the spot and raised objection to their action. “They are organizing games and cultural activities on the occasion of Sankranti. Assuming that cockfights were being conducted, the police took control of the ground and sent away the villagers. This is highly objectionable,” said the MLA.

However, the MLA supported the blood sport and claimed it’s a part of Sankranti tradition. “If cockfights were to be banned, then there should be a ban on sale of chicken meat. We are killing them (chicken) for meat. It’s a four-day affair and it is good if there is an exemption on it,” Prasad opined. However, police said they would implement the orders of the Supreme Court and the High Court banning cockfights. Joint police commissioner BV Ramana Kumar said they received credible information about some people organising cockfights in the name of rangoli and cultural activities as part of the festival celebrations.

Police also stepped in and prevented cockfights in a village in Vuyyuru mandal. “All the police concerned have been instructed to take stringent action against the organisers and punters who indulge in illegal activities like cockfights, gambling, etc. Special forces have been deployed at identified problematic areas,” Ramana Kumar told ENS.

Penamaluru is a neighbourhood of Vijayawada in Krishna district of the Indian state of Andhra Pradesh. It is the mandal headquarters of Penamaluru mandal in Vijayawada revenue division. As per the G.O. No. M.S.104 (dated:23-03-2017), Municipal Administration and Urban Development Department, it became a part of Vijayawada metropolitan area.

Police restrictions have done little to stop the sport. 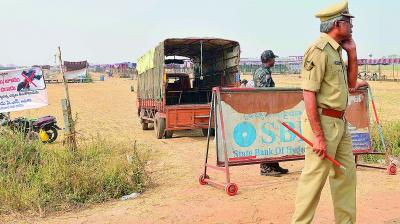 A police picket has been arranged near cockfight dens at Edupugallu where policemen keep a watch to prevent any untoward incidents from occuring near Vijayawada on Saturday. (Photo: DC)

VIJAYAWADA: Sankranti, which is the favourite festival of Telugus is hardly two days away and rural folk who look forward to their favourite sport have started gearing up for the season of cockfights. Police restricted arrangements of the cockfight camp organisers in and around Vijayawada City on Saturday.
Now all the known cockfighting villages are surrounded by policemen. Though there is a restriction by the police the blood sport continues to take place and the ruling party leaders themselves organise cockfights on the eve of Sankranti special celebrations in all Mandals of the district and other parts of the state.

Even a posh location in Vijayawada hosted a cockfight event organised by local legislatures. That was the growing craze for the cockfights in urban areas too. While a majority are gearing up with their roosters nurtured since long, others are making use of the Internet to sell off and buy roosters and get ready for the festival season in advance. The activity of cock fighting picks up with the new vigour and reaches a high during the three days of Sankranti in the third week of January.

Many rings arranged at Edupugallu near Vijayawada in the constitution of Penamaluru supported by the local MLA, Bode Prasad. There was a setting in around 10 acres and arranged with 50 to 60 Shamiyanas along with the teams of organisers. On the credible information to the police, joint commissioner B.V. Ramana Kumar reached and restricted Bode Prasad, MLA of Penamaluru twice while entering into the field to inaugurate it.

MLA expressed his dissatisfaction and commented that the police are acting aggressively. “We are having information that the participants are going to play with tied knife cockfights and we restricted the outers into the villages,” said B.V. Ramana Kumar. “We stopped the cock fights at Edupugallu, Uyyuru, Gandikunta, Bhavanipuram, Totlavalluru and Sanamakuru. We told them to arrange CCTV cameras and not tie knives to the cocks,” he added. Though, the police restrictions are in force Bode Prasad inaugurated the cock fights camp at Edupugallu village in the evening 8 pm.

They are going to organise not only cock fights but also sheep fights. According to an information source, some of the rings are going to conduct Kasinova and sheep fights along with cock fights. MLC Yalamanchali. Babu Rajendra Prasad inaugurated the cock fight camp at Godavarru. Ravi Venkateswararo, in-charge of TD inaugurated a camp at Gudivada. Now cock fight camps started at Poranki, Yanamalakuduru, Godavarru, and Edupugallu near Vijayawada. “We came from Vemuru near Tenali of Guntur to participate in the cock fight, but the police objected us to even enter the village, even we requested them that we are not using knifes,” said Sureddy Venkataratnam, who came to participate at Edupugallu of Krishna District, near Vijayawada.