Pressure grows on MLAs to turn blind eye to cockfights

VISAKHAPATNAM : People’s representatives in north-coastal districts are stuck between a rock and a hard place over the issue of cockfights.

The deadly bloodsport, which is an annual ritual of sorts as it is held during the Sankranti festival, is banned by the AP High Court. But elected representatives are facing growing pressure in their constituencies to ensure that the sport is conducted.

The representatives were warned by chief minister N Chandrababu Naidu as well as the DGP against allowing the bloodsport in their constituencies, but what makes matters worse for them is a subtle ultimatum given to them by their voters – allow us to get on with the sport or forget about running in the next elections. 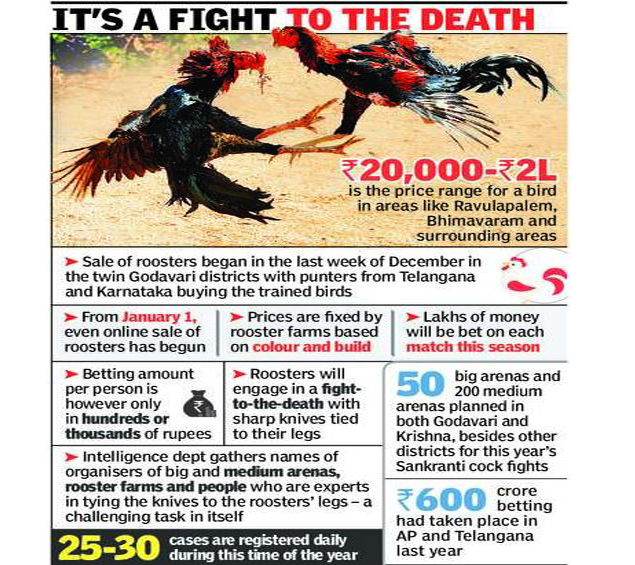 With Sankranti round the corner, the representatives are facing increasing pressure from the public to obtain a go-ahead for the sport. The situation now is such that it has turned into a prestige issue of sorts for locals and a noose for the political leaders.

“If we support the public, we will face action from the courts. If we uphold the court ban on the sport, we will end up ruining our support base and we won’t get a mandate for the next term,” said a representative requesting anonymity.

There are instances of people’s representatives going ahead with preparations for the fights in defiance of the HC order and warnings from the chief minister just to appease the locals in hopes of securing their support for another term. In the Godavari districts, there have been hectic preparations for cockfights with rooms being booked and liquor consignments being sold, according to sources.

Sale of roosters has also taken off and disputes between organisers for big arenas are being sorted out by village heads. Scores of punters from Telangana and parts of Karnataka are visiting the districts to buy roosters, which are specially trained for the sport. There is a high belief among locals that the government would go soft in enforcing the court diktat over the popular sport.

“The local public is literally threatening the people’s representatives – including MLAs and MPs and others, that the leaders will not get ot enter Assembly or Parliament next term if they fail to support the cock fights. People’s representatives are trying to convince the public that they will take care of the issue,” said G Veeranjaneeyulu, a punter from Godavari district.

“We are forced to support the cock fights. Otherwise, there is no political life for us. People are asking us to promise that there won’t be any hurdles in organising the cock fights during our five-year tenure whenever we go to seek votes. If you oppose the cock fights, you can kiss your election goodbye,” said an MLA from the Delta area on the condition of anonymity.

Cops in the Godavari districts are planning to form teams to ensure that the sport is not held. Following the HC directives, they are on toes. Organisers of big arenas are maintaining calm as they know that the show will go on at any cost, sources said.