Emergence of avian influenza viruses with the potential to be highly pathogenic to poultry, wild birds, and humans, such as the currently circulating highly pathogenic A(H5N1) (emerged in 1996) and A(H7N9) cause serious concern for the global economic and public health sectors. Understanding the spatial and temporal interface between wild and domestic bird populations from which these viruses emerge is fundamental to taking action. This information, however, is rarely considered in influenza risk models, partly due to a lack of data. 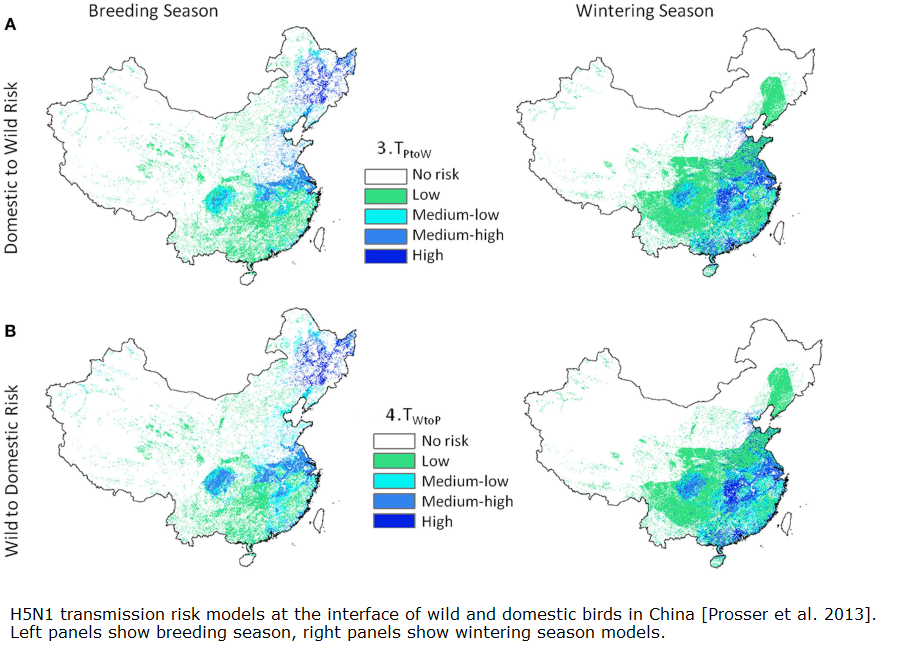 Visual representations of model data can be effective in helping to discover how the spread of the virus is influenced by environmental and human factors. We are developing a series of models for China and the United States that show the following:

Tracking wild bird migrations allows the identification of potential vectors involved in spreading avian influenza viruses. Migration data are available as point data showing the dates and locations of tracked birds. On this website, we collate data layers we have developed, along with additional data layers for physical, environmental, and administrative data layers. We demonstrate the advantages of bringing these layers together to inform science, allowing interested parties to explore spatial and temporal relationships among risk factors.

Two currently circulating avian influenza viruses, highly pathogenic A(H5N1) and low pathogenic A(H7N9) (hereafter H5N1 and H7N9) are of particular concern due to 1) their high case-fatality rates in humans (approximately 60 and 30% currently), and 2) the high rates of mortality to wild bird and poultry populations, which in turn negatively affects the the livestock industry and public health system. H5N1 first emerged in domestic geese in southern China in 1996 (Xu et al. 1999), and has since been detected in 60 countries across Asia, Africa, and Europe, killing 450 people since 2003.

H7N9 was first reported in a man from China who began showing symptoms in mid-February 2013.

In the following 12 weeks, the number of human cases rapidly rose to 132 [as of 7 June 2013], all within China. Since then, the number of outbreaks has continued to rise and the geographic spread of cases has increased dramatically.

Avian influenza continues to persist, with reports of animal infections in Bangladesh, Cambodia, China, India, Nigeria, and Vietnam and human cases in China and Egypt (2015 and 2016). This video provides an overview of the outbreaks, using data from the United Nations Food and Agriculture (UNFAO) database.

Tracking the Migration of Bar-headed Geese

To assess how the migration strategies of bar-headed geese are influenced by environmental conditions, we analyzed the relationship between migratory routes, temperatures, and vegetation coverage at stopovers sites estimated with the Normalized Difference Vegetation Index (NDVI) (Zhang et al. 2011).

Our results showed that there were four typical autumn migration routes. Each varied in start and end times, total migration distance, and stopover duration.

The observed variation may be related to habitat type and other environmental conditions along the routes. On average, these birds traveled about 1,300 to 1,500 km, refueled at three to six stopover sites and migrated for 73 to 83 days.

The majority of the habitat types at stopover sites were lake, marsh, and shoal wetlands, with use of some mountainous regions, and farmland areas. For additional related papers and satellite tracks, please see our publication list and tracking webpage.

This video gives an overview of the application and shows some of the features.

Supported browsers: You can access this application using Chrome, Firefox, and Safari.

The Avian Influenza Transmission Risk Model web application depicts the intricate connections between 16 layers of administrative, environmental, and economic data in an application that runs inside a web browser. 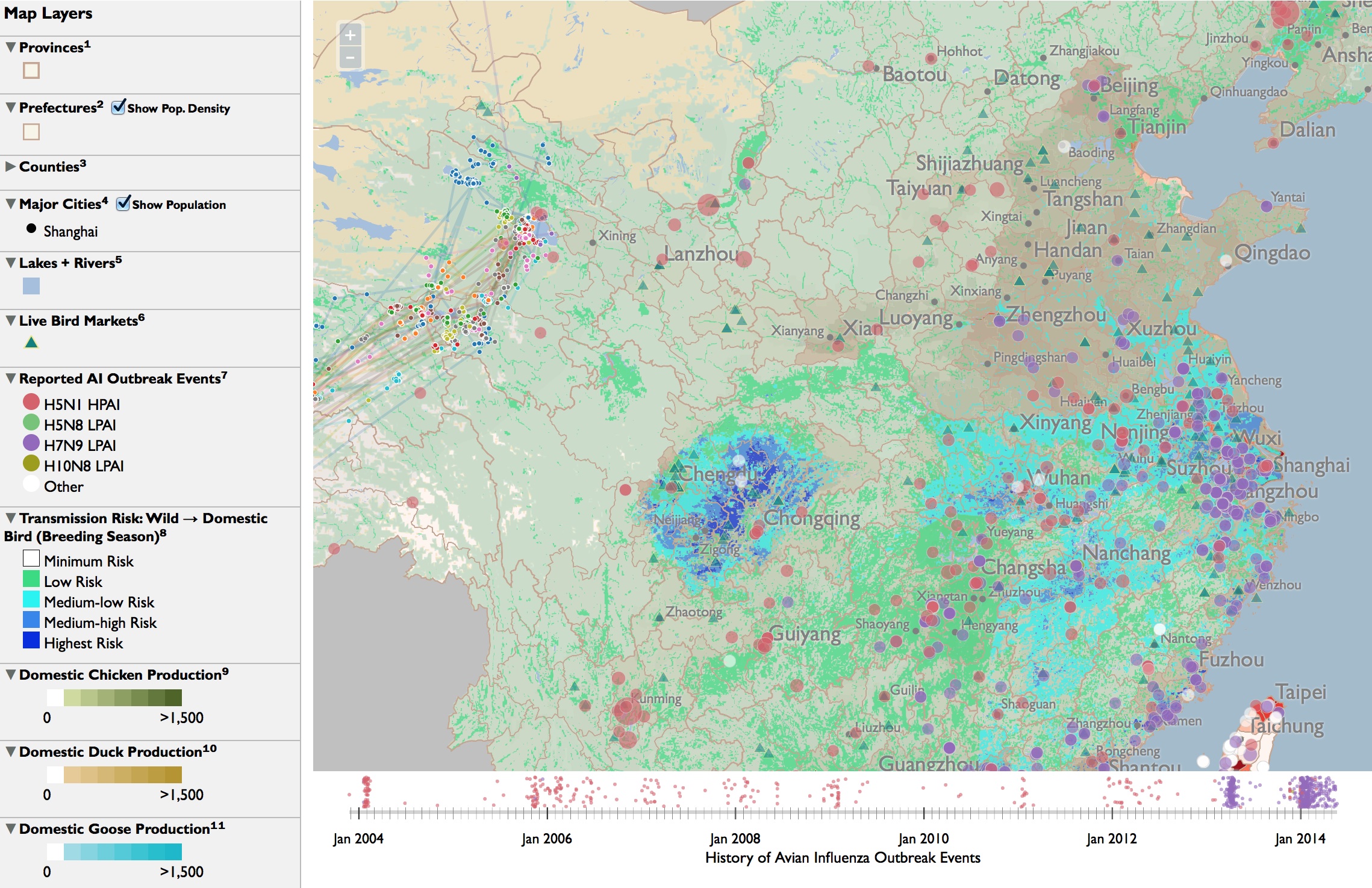 A zoomable, interactive map has a sidebar showing the legend, where layers can be turned on and off. The source for each layer is provided via hover text. Within the map, hovering over each point provides information about the data shown.

A click-and-draggable outbreak event timeline, color-coded for serotype, complements the map, giving users the opportunity to follow the history of the disease both spatially and temporally.

Supported browsers: You can access this application using Chrome, Firefox, and Safari.

We have developed a series of models for China, where H5N1 first emerged and the global debate on wild birds began. In this section we give more information on the approach we took in developing the models. 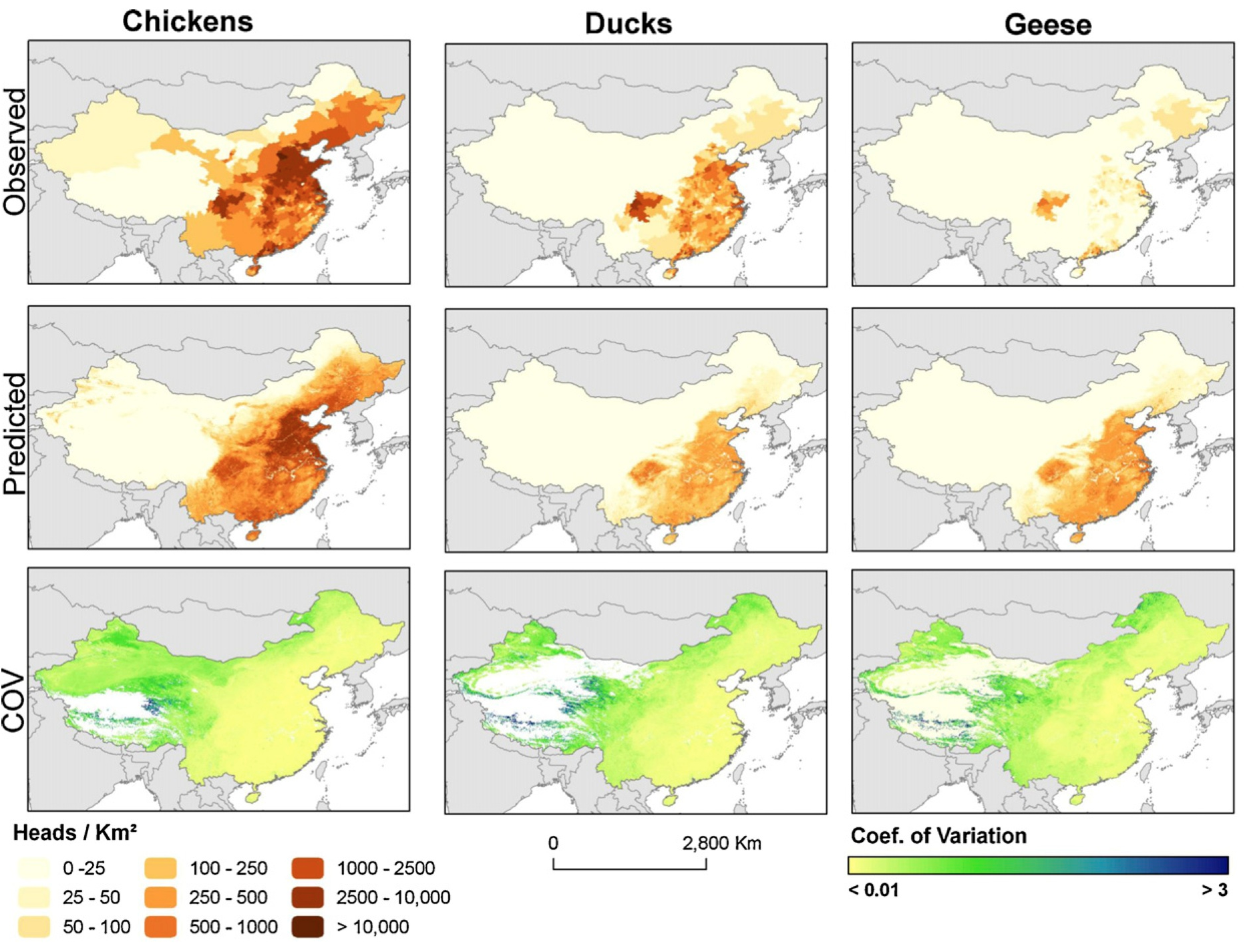 We first started by identifying spatial distributions of the main populations of concern: poultry (chickens, ducks, and geese, separately, as these types have different susceptibility and risks for further transmission) and wild birds (mainly waterfowl, which are known reservoirs for non-lethal forms of avian influenza, and which also have different risk factors depending on the species). Once we derived the base spatial distributions (at 1km resolution across China), we used these as inputs for a disease risk model that takes into consideration densities of potential spreaders, viral shedding rates, and virus uptake rates by receiving hosts. This disease model helps us to identify areas where risk of transmission between wild and domestic populations is highest.

For the waterfowl distributions (wild birds), robust datasets for the suite of species did not exist for use in conventional species distribution modeling. We took a habitat suitability approach to predict areas where birds may be found. Equations were built in GIS relating habitat requirements for each species to environmental predictors and the resulting maps were cropped to the known range for each species. This process was completed for both the breeding and wintering seasons. Once the binary distributions were developed, we applied prevalence rates and population estimates to create prevalence-weighted population estimates for each species as inputs to the disease risk models.

The transmission risk model takes into consideration densities of potential spreaders, viral shedding rates, and virus uptake rates by receiving hosts. It is a combined density-dependent and environmental transmission model, meaning that transmission can occur from bird to bird as well as through the environment, and risk is related to population size. There are multiple versions of model output including:

The risk models are valuable to those trying to fight the spread of H5N1 as well as the emergence of new viruses at the interface of wild birds and poultry. The poultry and wild bird distribution models are useful to a broad range of users from the livestock to wildlife conservation fields.