In Wall Street Journal Asia Covering 2011 WSC-1 Finals (Cockfighting is a Livelihood and an Industry), an article about professional journalists and black propaganda against cockfighting sports, I talked about meeting Ted at 2011 World Slasher Cup 1.

On an unusually rainy January evening in Manila, a raucous crowd of about 3,000 at the modern and brightly lit Araneta Coliseum is tense as two fighting cocks prepare to battle inside a dirt pit at the World Slasher Cup.

Hundreds of kristos, or bookmakers, call out and flash hand signals to record the bets of their patrons. A referee removes leather sheaths from the five-centimeter steel blades each bird wears strapped to one leg. Moments later, the cocks fly, kick and slash inflicting deep wounds. In less than a minute, the fight is done.

In the front row of the VIP section, a 75-year-old American from Alabama sits with a cane resting on his knee and a wad of cash in his hand. Heavyset and wearing glasses and a baseball cap, Ray Alexander says he feels right at home. 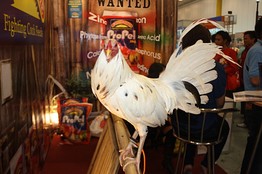 “This is the only sport in the whole world where there will never be one argument,” Mr. Alexander says in a thick southern drawl. “If you lose, you pick up your chicken, hold your head high and walk out with class and dignity.”

Almost every country has its blood sport; bullfighting in Spain and parts of Latin America; fox-hunting in the U.K.; moose, deer, bear, ducks—all hunted around the world. All are controversial and draw criticism from opponents who see blood sports as barbaric and inhumane.

On the website of the Asia-Pacific branch of animal-rights group PETA (People for the Ethical Treatment of Animals), the organization devotes an entire section to fighting animals, much of which looks specifically at cockfighting. PETA says animals do fight in the wild—over food, mates or territory, for instance—but “they rarely fight to the death.”

“Cockfighting is an archaic spectacle that only teaches children it’s OK to maim and kill animals for entertainment, and it’s best left to the history books,” says Rochelle Regodon, PETA’s regional campaigns manager based in Manila.

PETA says breeders often mutilate their birds to give them a stronger chance in the ring, and the group has campaigned against cockfighting in the Philippines in the past. Still, the Philippine Animal Welfare Act remains “conspicuously silent on the matter of cockfighting,” PETA notes on its website.

Most Western countries have restricted cockfighting, or banned it altogether. In 2007, it was outlawed in Louisiana and Arizona, the last two American states that allowed it. The same year, the U.S. Congress amended the Animal Welfare Act, making it a felony for “knowingly buying, selling, or transporting animals across state or international borders for the purpose of fighting.”

Some American game fowl breeders head for Mexico, where cockfighting is still open and popular. Others come to the Philippines.

At the Slasher Cup, Mr. Alexander is the personal guest and breeding adviser of Jorge Araneta, owner of the Araneta Coliseum—the pair met at a cockfight in Phoenix in 1970. The American has been breeding game fowl for most of his life and has earned a reputation for being able to spot “gameness” in a chicken—the special will to win at all costs.

“I look for a boxer’s build,” Mr. Alexander says under the din of the crowd. “A good boxer is tall and skinny, except they got big shoulders. A weight-lifter can throw a punch maybe 30, 40 miles an hour. A little skinny boxer can throw a punch 200 miles an hour. They don’t weigh nothin’ but it’ll travel so god-darned fast it’ll pop you from here to yonder. It’s common sense.”

In the world of cockfighting no competition is bigger or more important than the World Slasher Cup. The tournament was first staged in 1969 and is held twice a year, in January and June—the next Cup starts Monday and lasts until June 12. The event is run as a “derby” where top breeders pay $1,400 to enter eight of their best fighting cocks. The fights take place almost nonstop from late morning until the early hours for seven straight days. The entry with the most wins claims the prize.

This January, top game-fowl breeders from Malaysia, Japan, Mexico, and the U.S. were among a tournament record 284 entries competing for $350,000 in prizes. June’s event is expected to be smaller, with a prize fund of about $300,000, as it takes place during the molting season, when birds shed their feathers.

It is impossible to verify the exact number of cockfighting pits in the Philippines, but it’s certainly in the thousands. The gaff, the metal blade tied to the chicken’s leg, was introduced by Spanish colonists who arrived in the country in the 16th century. The sport was popular among American military personnel stationed in the country in the early and mid 20th century, too.

In the Philippines today, there are also glossy magazines dedicated to cockfighting, televisions shows, and websites. Thunderbird, a brand of chicken feed and veterinary products aimed at fighting cock breeders, claims to have revenue of $180 million.

“[Cockfighting] is ingrained in the culture of Filipinos,” said Emmanuel Piñol, a former three-term governor from the Philippine province of North Cotabato, a rural area on the southern island of Mindanao. “It is said you can talk bad about a Filipino’s wife, but never talk bad about his rooster.”

Some in the Philippines have become rich from the sport. Cresensio Marzo is a retired commercial pilot who won the World Slasher Cup in 2005. He now runs an 11-hectare breeding farm with about 4,000 birds and says he earned more than $180,000 selling roosters and hens last year alone.

At the January Slasher Cup, more than two dozen breeders from the U.S. were on hand.

“I would consider it more of a legal testing facility, a place to test your game fowl to see what they have, something that I can’t do in the States,” said Larry Esquibel, a breeder from California. “This is a yardstick to see what level of breeding you’re at.”

At 75, Mr. Alexander finds it hard to get around, and he doesn’t know how many more trips to the Philippines he can handle. He plans to attend next week’s World Slasher Cup.

He’s been coming to cockfighting events in the Philippines for 40 years and though he doesn’t have a direct stake in the Slasher Cup these days, many of his birds have been purchased by top Filipino breeders and have gone on to win many titles.

He’s as close to a cockfighting celebrity as it gets here.

At the Slasher Cup he can find himself sitting next to politicians and celebrities and posing for pictures with beauty queens.

“If I didn’t have something to drive me out there, I would die in no time,” he says. ” I do it because I love it. I want the accomplishment of being able to raise the best chickens on earth. Look at this. I was raised poor as dirt, but now I’m over here with the millionaires.”