Hendrik Goltzius: Mercury, with The Gamecock

Mercury is a major Roman god, being one of the Dii Consentes within the ancient Roman pantheon. He is the patron god of financial gain, commerce, eloquence (and thus poetry), messages/communication (including divination), travelers, boundaries, luck, trickery and thieves; he is also the guide of souls to the underworld. He was considered the son of Maia and Jupiter in Roman mythology. His name is possibly related to the Latin word merx (“merchandise”; compare merchant, commerce, etc.), mercari (to trade), and merces (wages). In his earliest forms, he appears to have been related to the Etruscan deity Turms, both of which share characteristics with the Greek god Hermes. In Virgil’s Aeneid, Mercury reminds Aeneas of his mission to found the city of Rome. In Ovid’s Fasti, Mercury is assigned to escort the nymph Larunda to the underworld. Mercury, however, fell in love with Larunda and made love to her on the way. Larunda thereby became mother to two children, referred to as the Lares, invisible household gods.

Mercury has influenced the name of many things in a variety of scientific fields, such as the planet Mercury, and the element mercury. The word mercurial is commonly used to refer to something or someone erratic, volatile or unstable, derived from Mercury’s swift flights from place to place. He is often depicted holding the caduceus in his left hand.

Mercury did not appear among the numinous di indigetes of early Roman religion. Rather, he subsumed the earlier Dei Lucrii as Roman religion was syncretized with Greek religion during the time of the Roman Republic, starting around the 4th century BC. From the beginning, Mercury had essentially the same aspects as Hermes, wearing winged shoes (talaria) and a winged hat (petasos), and carrying the caduceus, a herald’s staff with two entwined snakes that was Apollo’s gift to Hermes. He was often accompanied by a cockerel, herald of the new day, a ram or goat, symbolizing fertility, and a tortoise, referring to Mercury’s legendary invention of the lyre from a tortoise shell.

Like Hermes, he was also a god of messages, eloquence and of trade, particularly of the grain trade. Mercury was also considered a god of abundance and commercial success, particularly in Gaul, where he was said to have been particularly revered. He was also, like Hermes, the Romans’ psychopomp, leading newly-deceased souls to the afterlife. Additionally, Ovid wrote that Mercury carried Morpheus’ dreams from the valley of Somnus to sleeping humans.

Archeological evidence from Pompeii suggests that Mercury was among the most popular of Roman gods.The god of commerce was depicted on two early bronze coins of the Roman Republic, the Sextans and the Semuncia.

When they described the gods of Celtic and Germanic tribes, rather than considering them separate deities, the Romans interpreted them as local manifestations or aspects of their own gods, a cultural trait called the interpretatio Romana. Mercury in particular was reported as becoming extremely popular among the nations the Roman Empire conquered; Julius Caesar wrote of Mercury being the most popular god in Britain and Gaul, regarded as the inventor of all the arts. This is probably because in the Roman syncretism, Mercury was equated with the Celtic god Lugus, and in this aspect was commonly accompanied by the Celtic goddess Rosmerta. Although Lugus may originally have been a deity of light or the sun (though this is disputed), similar to the Roman Apollo, his importance as a god of trade made him more comparable to Mercury, and Apollo was instead equated with the Celtic deity Belenus.

Romans associated Mercury with the Germanic god Wotan, by interpretatio Romana; 1st-century Roman writer Tacitus identifies him as the chief god of the Germanic peoples.

In Celtic areas, Mercury was sometimes portrayed with three heads or faces, and at Tongeren, Belgium, a statuette of Mercury with three phalli was found, with the extra two protruding from his head and replacing his nose; this was probably because the number 3 was considered magical, making such statues good luck and fertility charms. The Romans also made widespread use of small statues of Mercury, probably drawing from the ancient Greek tradition of hermae markers.

Mercury is known to the Romans as Mercurius and occasionally in earlier writings as Merqurius, Mirqurios or Mircurios, had a number of epithets representing different aspects or roles, or representing syncretisms with non-Roman deities. The most common and significant of these epithets included the following:

Vulcan created a net out of unbreakable steel so that he could catch Venus, the goddess of love and beauty, and Mars, the god of war, in the act of making love. He was jealous of their relationship, because Venus was his beloved wife. Vulcan managed to catch them but, afterwards, Mercury stole the net from the blacksmith god so that he could catch Chloris, a nymph whom he admired. Chloris was tasked with flying after the sun while it rose and scattering lilies, roses and violets behind it. Mercury lay in wait for at least several days until he caught her wing in the net over an unnamed great river in Ethiopia. Mercury then gave the net to the temple of Anubis at Canopus to protect the sacred spot. In Ludovico Ariosto’s Orlando Furioso, the net is stolen 3,000 years later by Caligorant, who goes on to destroy the temple and the city.

Mercury’s temple in Rome was situated in the Circus Maximus, between the Aventine and Palatine hills, and was built in 495 BC.

That year saw disturbances at Rome between the patrician senators and the plebeians, which led to a secession of the plebs in the following year. At the completion of its construction, a dispute emerged between the consuls Appius Claudius Sabinus Inregillensis and Publius Servilius Priscus Structus as to which of them should have the honour of dedicating the temple. The senate referred the decision to the popular assembly, and also decreed that whichever was chosen should also exercise additional duties, including presiding over the markets, establish a merchants’ guild, and exercising the functions of the pontifex maximus. The people, because of the ongoing public discord, and in order to spite the senate and the consuls, instead awarded the honour of dedicating the temple to the senior military officer of one of the legions named Marcus Laetorius. The senate and the consuls, in particular the conservative Appius, were outraged at this decision, and it inflamed the ongoing situation.

The temple was regarded as a fitting place to worship a swift god of trade and travel, since it was a major center of commerce as well as a racetrack. Since it stood between the plebeian stronghold on the Aventine and the patrician center on the Palatine, it also emphasized the role of Mercury as a mediator.

Because Mercury was not one of the early deities surviving from the Roman Kingdom, he was not assigned a flamen (“priest”), but he did have his own major festival, on May 15, the Mercuralia. During the Mercuralia, merchants sprinkled water from his sacred well near the Porta Capena on their heads.

Mercury in his role as messenger on a 1949 stamp
issued in connection with the Universal Postal Union.

Cast of Mercury holding a caduceus and a purse,
with a cockerel or rooster, a tortoise and a goat is
inside a 2nd century silver cup from Gaul.

The quick Mercury is the next closest in the sequence, showing Mercurius (the Roman version of the Greek Hermes) with his typical iconography. The winged sandals and cap are fairly familiar; the staff with the two intertwined dragons might hint at a Caduceus. Mercurius is accompanied by a rooster, a bird that due to its habit of crowing at dawn became a symbol of the victory of day over night.

Mercurio/Mercury himself – in his original meaning – did not find his way into the traditional Tarot, but ever since the early occultists threw themselves into Tarot studies, Mercury/Hermes evolved into the thrice-bloated Super-Hermes and heavily tainted the poor, unsuspecting Il Bagatto.

Mercury, the messenger of the gods.  In Roman times, Mercury was regarded as the god of merchandise, merchants, and commerce.  He is often depicted as holding a purse to signify his rulership over profits.  Today Mercury is regarded as the thinking faculty, and rules all types of communications, information, inquiry, and investigation. 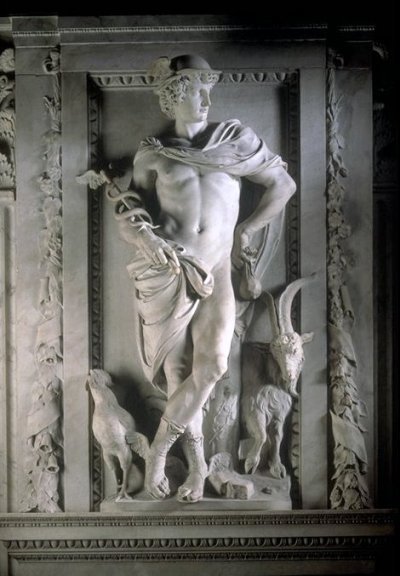 How will we define Mercury as used in astrology for business?  Remember, there are three different options in the business use of astrology.

Mercury in a Businessperson’s Chart

Let’s look at Mercury in a businessperson’s chart.  Extrapolating meaning from the personal definitions, we can say that Mercury in a businessperson’s chart describes their conscious thinking and intellect, how shrewd they are.  It also describes their conversation style and their aptitude for spoken and written communications.  It can describe their facility with information technology and analytical tools.  As the general ruler of commerce, Mercury can describe the person’s approach to business, and their natural facility in purchasing, sales, and negotiating.

Mercury in the Chart of a Business

When we look at Mercury in the chart of a business, we take the essential meanings of Mercury in a personal chart and combine them with the meanings of Mercury in a mundane chart.  A business is an entity in that it has a birth, a life cycle, and an end, and it has meaning and purpose like any other being.  It is like a child of a person’s imagination and desire.  But it’s also impersonal, in that it doesn’t carry its own conscious evolvement even though it passes through phases and cycles like everything else on earth.  In this way it is more like a mundane chart and the meanings from that branch of astrology apply.

Much thanks for the following vocational information to Noel Tyl.  As my first astrology teacher in the 1970s, his work continues to influence my thinking to this day.  He has recently published Vocations, the New Midheaven Extension Process, which outlines the various vocations that are connected with each of the planets.

Some of the vocations associated with Mercury include communications, sales, travel, broadcasting, accounting, and media.  Do you see how these are connected to the other descriptions?  The essential energy of Mercury takes slightly different but related forms in the different expressions.